skip to main | skip to sidebar

I don’t know whether I have ever mentioned that part of our Diversity campaign, which is at the heart of the 90,000 word long S Thomas’s Mission Statement, is our Outreach to Christians of the Syrian Rite. A group of South Indian Christians worship in our church; and recently we had a visit from the diocesan bishop. On these photographs, he is the taller of the two bishops. The other bishop is the bishop of Cochin, who is visiting England and jumped at the opportunity to visit such an important and well-known Oxford church. See if you can guess which of the two priests is me and which is my pro ritu syriaco curate. 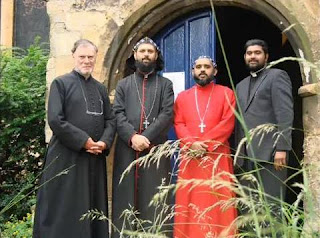 My Indian Syrian people are what hardliners among you might unjustly call Monophysites. They cook fabulous South Indian fish curries, and their womenfolk are decidedly fetching. I am beginning to rethink my attitude to the Chalcedonian Definition. Here are some more pictures of the Visitation. As the Slovak waitresses in our local Italian restaurant say, “Enjoy”. 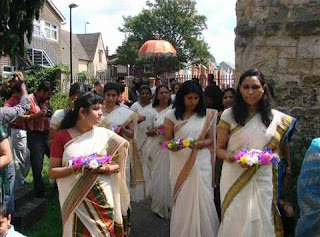 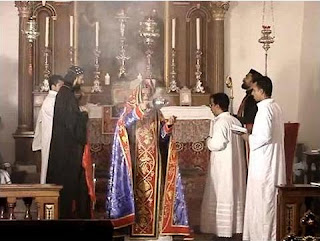 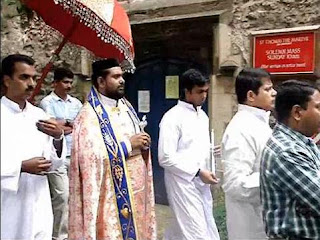 Well they are certainly very colourful and whatever the song on the video clip was about it sounds rather jolly.

I couldn't work out what the liturgical item resembling an ombrellino was for. They seem to have been held over the bishops and just held by other people themselves.

They appear to cross themselves left to right.

Heretics…hardly! That remark only goes to show both a lack of Christian Charity and a true Ignorance on the History of Christology.

The “Oriental Orthodox Churches” hold to the ORIGINAL Christology of the Church up until the Chalcedon change, and yes, it was a CHANGE. So, if anyone says that the Oriental Churches are heretical that would mean that the ENTIRE teaching of the Church was heretical prior to Chalcedon and that certainly isn’t truth.

At all Ordinations & Episcopal Consecrations the Clergy of the Oriental Churches swear an oath against Eutyches who taught that in Christ the human nature was absorbed by the Divine nature. Nestorius is also rejected. I know this is a fact because as a Priest – Monk of the Ethiopian Church I had to swear such at my Tonsure as Monk, Ordinations as Deacon and Priest. I also know from the mouth of the late Metropolitan Thomas Mar Makarios of the Syrian Church in India that he like wise had to swear an oath against Monophysitism and Eutyches etc.

People in the Western Church should really take a in-depth look at the history of Christology; in the end the Incarnation is a DIVINE MYSTERY beyond human words and understanding. The Oriental Orthodox Churches confess that in Christ Jesus is both Divine and Human; we hold to the Original Christology of the first Three Councils.

Sorry to mix metaphors but they look

was for nearly three decades at Lancing College; where he taught Latin and Greek language and literature, was Head of Theology, and Assistant Chaplain. He has served three curacies, been a Parish Priest, and Senior Research Fellow at Pusey House in Oxford. Since 2011, he has been in full communion with the See of S Peter. The opinions expressed on this Blog are not asserted as being those of the Magisterium of the Church, but as the writer's opinions as a private individual. Nevertheless, the writer strives, hopes, and prays that the views he expresses are conformable with and supportive of the Magisterium. In this blog, the letters PF stand for Pope Francis. On this blog, 'Argumentum ad hominem' refers solely to the Lockean definition, Pressing a man with the consequences of his own concessions'.

... once graced the high altar of the church of Sancta Maria in Ara Coeli on the Capitoline Hill.